North Westerly forecast for Saturday or something in that general direction. maybe turning a bit to the west later. so.. where to go. I was half thinking of clough head then someone (Logan) suggested the moorfoots might be worth a look.

I've always felt the Moorfoots were a tad far for me (from Lockerbie) but for some reason I thought it might be worth a look.

A plan was hatched. Head to Tommy's then to Innerleithen (to pick up Dudley) and get to the hill relativly sharpish.

10.30 am. made it to the parking for the Moorfoots. 3 different cars involved (none broke down just swapped cars at each stop!) The wind turbines were pointing in the right direction so we headed onto the hill. Rather than take off near the car we took the quad bike track via the ariel to the third bump on the ridge (I think). Tommy 'I'm thinking of giving up paragliding' was first set up and off like a shot. 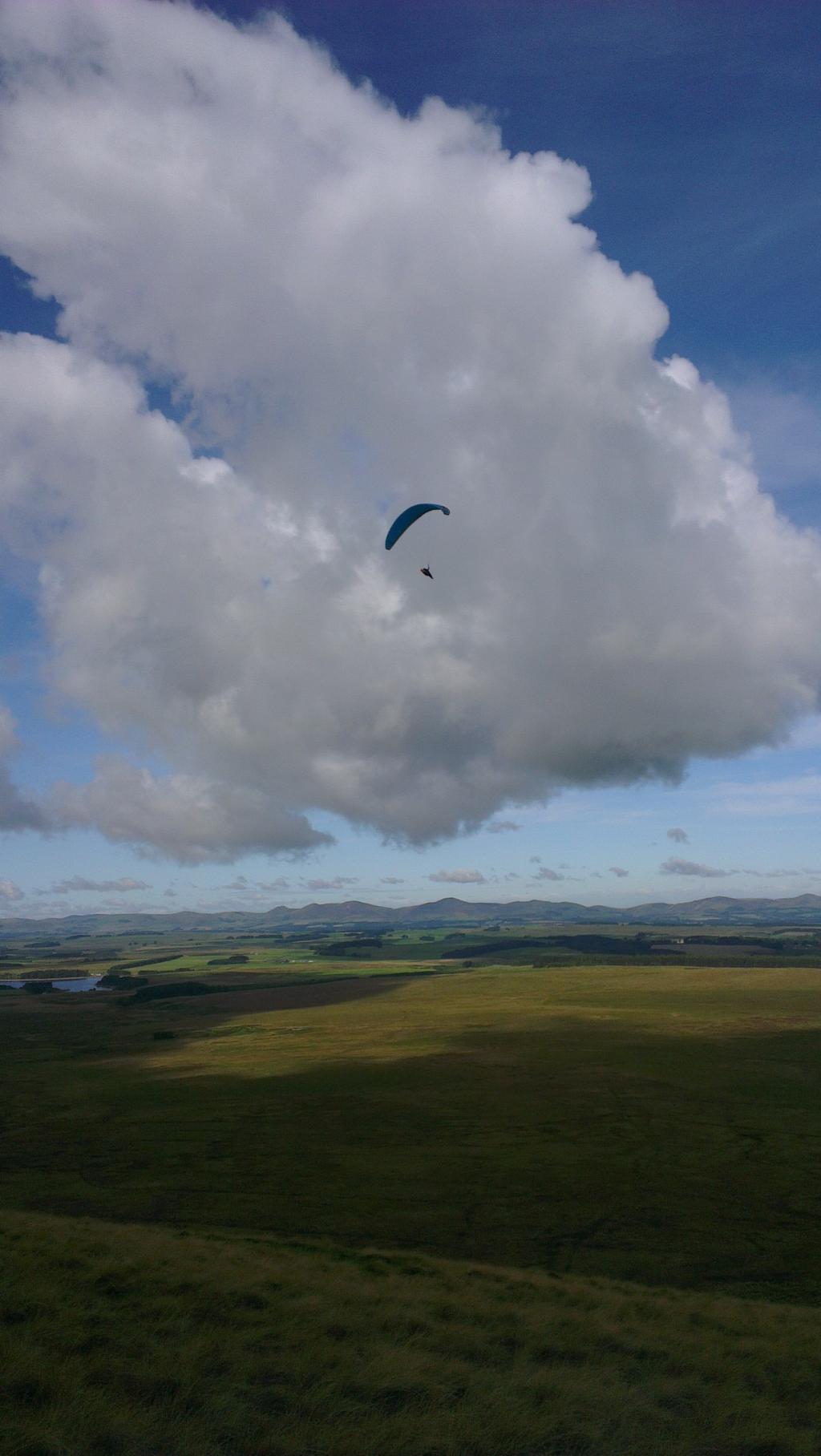 Lift everywhere apparently. I faffed a bit but not as much as normal and once Tommy was off for a second go got ready. Tommy was a wee bit low but then got some lift so I took off.

There was a fair bit of lift about. Quite thermic at times but not too bad.. Dudley joined us after a wee while. We kind of explored the lift around this part of the ridge for a while. Later discovered Dave Lyal had walked in and was the figure walking up the hill as we were starting to get a bit of height.

I wandered over to that side of the hill and waved. Turned round to see Dudley and Tommy heading west along the ridge. so turned to follow.

I've not flown the hill/ridge before so wasn't sure of good/bad areas of lift so played it safe and topped up a bit wherever I got some lift. Dudley seemed to be cruising on the Sigma but Tommy was getting low.. A deer ran down the hill while I was watching them get along the ridge then Tommy was down on the slope. :-(

I had a bit of height and followed, and it was going well until I was level with Tommy then I was in the sink too. It looked like I was going to land next to him or maybe even lower when the sun popped through and I got a climb back up. Headed along the ridge towards Dudley and Tommy was soon back up in the air and past bellow me. I was topping up again and taking it easy.

Got to above the trees at the end and kept going across a gulley (not sure what point is classed as the end to be honest) and then got a bit of sink so headed back along the ridge a bit. Got Low, Got high. got low again. Dudley was playing about (with a fair bit of height) at the end of the ridge but I decided to head back towards take off. a couple of good climbs got me cruising along back to the road / where the cars were parked. Not being sure of the terrain to the east of the road I then headed back towards take off. Tommy scooted below me by the quarry and landed to the east of the cars to chat over there with Dave hutch and co.

I got another climb over the quarry and then headed back to the take off. Had plenty of height but decided to top land and close the out and return flight with some lunch.

Later saw Dave Lyal head east, Sean heading west and back (with a wee break at the end of the ridge) with Dudley.

Having achieved my unofficial goal for the day and feeling that things were a tad gustier than earlier I packed up and walked back. Not sure it was the best plan as others were flying but happy with my flight. Just need to work on setting and extending the goal/challenges in my head while flying instead of on the ground.

Headed back to Innerliethen for some ice cream then swapped cars and back to Tommy's. Swapped cars again and home just in time for tea.

A cracking day out. A new site flown and a rather long write up...