The day started bright and sunny but as I'm talking about 6am it was bound to change as our club was hosting a round of the Scottish Nationals paragliding comp.

By 8.30 there were clouds in the sky. Quite sculpted clouds.. known by paraglider pilots as "wave" clouds. Pretty much a normal start to a days paragliding competition in the UK then!

We met up at the (wild) campsite at Cacra for 10am. tents were put up. Radios checked. and then Tommy suggested we should get our arses in gear and get round to the hill! So off we went to Sundhope heights - a little flown site in the yarrow valley.

Dave Lyle spotted us coming across the top swire road then came over the radio asking if it was us or a very fast funeral procession! With so many black shiny vehicles he did have a point.

Duncan the farmer at Sundhope sorted us out with a great parking spot then we were off up the hill.

Sundhope was chosen as it's not quite as steep as some of our other nw'ly sites and as that was the forecast (along with strengthening winds) it seemed a good option. https://vimeo.com/104458121

17 pilots made it to the top of the hill so not too bad a turn out although a large proportion were wingbeat members. a Task was decided on - fly to selkirk. Then it got changed.. lets fly to Hawick. then goal was changed back to Selkirk with multiple launch attempt allowed so that we could make the most of the day.

The weather was not playing ball. the wave clouds had gone but more wnw then w breeze kicked in. this changed the dynamic of the task from an easy ridge soar along the hill to more of a thermal up and glide type thing. We also sneakily took the radio off Tommy so he couldn't change the goal again ;-)

Gordon was first up and away followed closely by Sean. Mike Jardine was flying up and down the bowl but managed to get along the ridge when the wind briefly came back on the NW'ly face.

Gordon landed while Sean sailed over his head. Sean eventually got a climb up and along and landed at the Selkirk cricket ground (as the rugby pitch was in use!)

Gordon made it to Newark tower so close but not close enough. Mike made it a bit further than the Fish farm. Other pilots had a go but the majority were put off by the rain showers and quite active sky in between.

Scott, a visiting pilot from Australia (originally uk?) via India had a fly down on Tim's glider but this coincided with the storm clouds clearing. The wind picked up (showers possibly blocking the Met wind??)  so.. Tim's glider got a nice long gale hanging fly down.. speedbar works too!

After the wind picked up we called an end to the day and headed back to the campsite for bbq, beer and bonfire.

but.. Quentin had an idea... why not fly the hill above the campsite. so... why not!

About 8 of us headed up and were rewarded with a short walk and what we thought would be a fly down. The first off did indeed fly down but Kenny Cooper tried flying onto the other side of the hill to the south of the campsite.  This worked so the rest of us followed.

There were some fireworks along the way. .. will rockets fired!! (so who's filling in the safety report?) but no gliders or pilots were harmed. some underpants may have been soiled slightly... 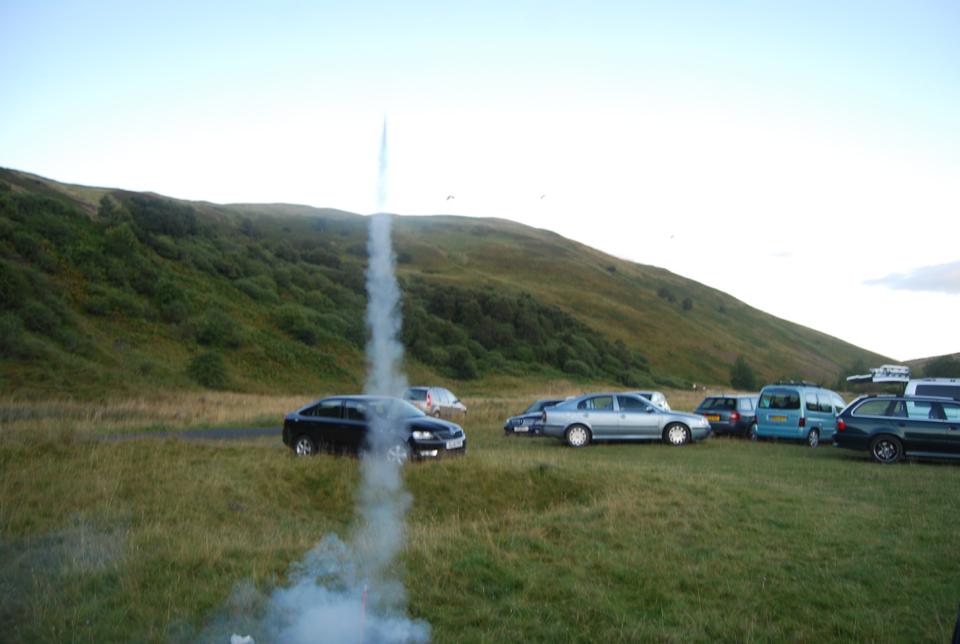 By the time we had all landed the bonfire was started and the bbq was going well. So food, liquid refreshment and some good company finished the day off.

Not too much silliness around the campfire..