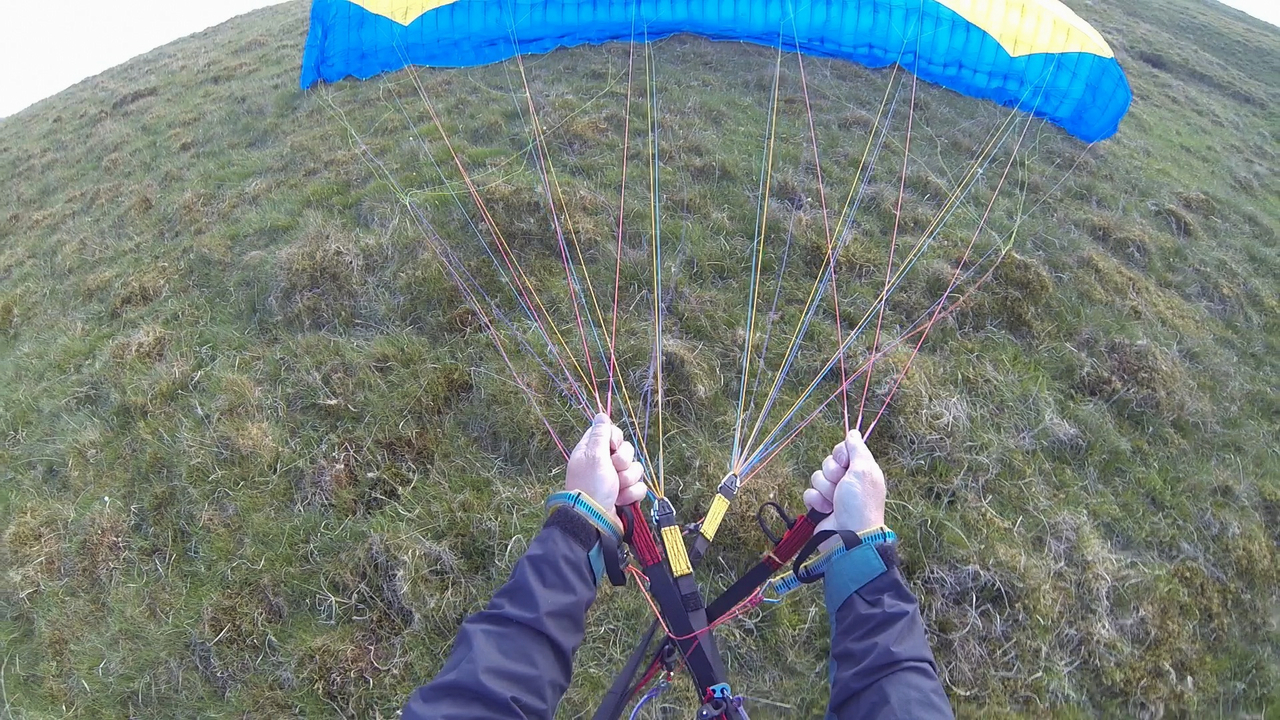 Headed up Bridgend on Thursday evening as there were rumblings on the Wingbeat email group. No-one about when I walked up but just after six when I had set out and clipped in I saw Jamie arriving at the bottom with Steven.

Reassuring to have a medical team on standby I always think.

The due east breeze measured 7-9mph and the sky was clear blue all the way up the loch, so I made a (for once) unhurried launch and felt quite pleased with myself. I know this is normal for all the rest of you guys, but it's a bit of a novelty for me.

I always promise myself that I'll do lots of ground handling practice, but the reality is that as soon as I have a wing at least semi-inflated above me I cannot resist the lemming-like urge to fling myself gracelessly off the hill. Perhaps it went so well because no-one was looking? Anyway, I have video evidence, which I keep watching over and over and showing to people until they are sick of it.

But I digress, so back to Bridgend.

Considering the blue sky, and the fact that it was after six, the air was surprisingly bumpy. I flew straight into a lifty bit that took me about sixty feet ATO and relaxed when I could look over my shoulder right up the valley and over the back.

It proved short-lived, and the lifty bit was closely followed by a sinky bit. It seemed to be cycling every ten minutes or so. I could see Jamie and Steven walking up, and got really low on the hill a couple of times but managed to scrape back above the top just in time.

Most of the action seemed to be around that little gully with the bushes in it, although when it was buoyant I could fly right round the corner into the evening sunshine towards Megget and still be turning in lift. Some of the action in that gulley was more than I was expecting, and when the vario hit five-up I started singing along with it.

I have a bad habit (one of many) of holding on to the risers when I am anxious. I always imagine it's similar to grabbing the mane of a runaway horse, and just as ineffective.

After half an hour or so the others were nearly at the top, so I started really trying to get ATO so that I could top-land and have a blether. “Really trying” proved to be my undoing, as my glider always seems to fly much better when I don't interfere with it. Despite my best/worst efforts, I slowly lost touch with the top, and this time there was no low save and I gradually slipped down the hill. Because I'd been scraping the face I ended up too low to cross the road, so landed at the bottom well back from the trees.

Last time I landed there I got a little fright as I flew into a huge hole in the air about forty feet up and the glider surged right in front of me. Before I had time to consult the manual, it shot behind me, leaving me only time to think “this might hurt”. Suddenly it sorted itself out, and the last six inches of the descent was fine. I didn't want a repeat of that, so I was four times further away from the trees, but it was still a very bouncy approach.

Steven told me later that he had the same feeling, and changed his approach on finals to cross the river and land in the mostly empty field. I wonder if it might be that the boggy bits of ground there are generating a bit of heat and sending bubbles of lift up? Anyway, another brilliant session at Bridgend with about 45 minutes in the air.

Such a beautiful place to fly, and I don't think I'll ever tire of it.

Chatted to Jamie afterwards and he said that's the fifth time in a row he's flown here. Will post this just now and follow with a video once I get it down from a 4GB, file as I'm sure the whole world wants to see my take-off.