Someone said it might be worth going to Glencoe on Saturday. Probably Derek. We'll blame him as a starting point.
I've only been up that way once before. So thought... Why not.
Friday night. Checked the forecast. Westerly. WTF?
Rob's response... It's an adventure. Why not.

Left Lockerbie 6.30am. Got to Green Welly @ tyndrum and caught up with Derek, Rob and Tommy. Then onto Glencoe.
Bacon roll and lots of flying chat. A good wingbeat turnout. Tommy, Rob, Derek, Fred, Sean, Steve, Dee, Dorita and Me.

The morning was getting on. Must of been at least 10.30. Light NE at the bottom of the chairlift. Lots of theories on what would happen. Something would happen.

So up the chairlift then a short walk to take off. Lots of people there so pick a spot and then wait for conditions to improve.

Some brave souls lobbed off. Some went down. some went up. Time passed. Tommy headed off.
Rob's comment... Where is he going.
Answer... sled ride to the landing field.

Rob followed eventually. He went up a bit. but was down not long after. Similar story for me, Steve, Dee and Sean.

Another chairlift ride and wee walk.. Lots of gliders thermaling above take off but as I got closer everything shut down.
Set up but nothing happening.

Derek was getting bored of the hanging about (yet to have flight 1) so forward launched when he saw some thermaling out in the valley. 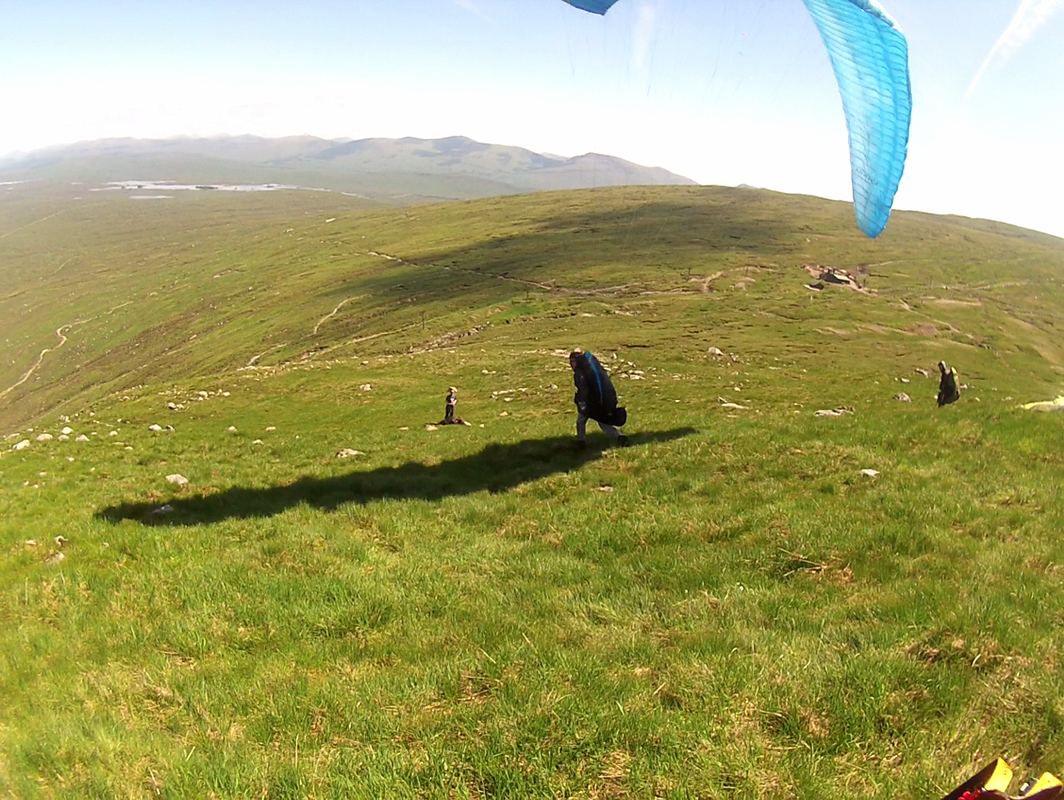 He got to the thermal. Tommy was quick to follow. Tommy got to the bottom of the thermal. It was quite a good demonstration of the difference between an Alpha and a Sigma.
Rob just cruised out.
I watched.
No wind on take off and I don't like forward launching. (must practice more).
The guys thermalled up and about and around. I got hot and bothered on take off. Got 40min video of my risers and a wee bit of swearing. I'll spare you the video.
Tommy landed. Derek flew to the pub. Rob and Sean headed down Glen Etive. Sean landed in the sea brease by the cross roads. Rob wantered a bit.

After more faff I took off. Straight into a climb. Up and down. and round. Saw Rob scratching below me. He eventually climbed up and got above me. Must try harder.
He then headed off. I followed a skywalk south. We climbed some more. Occils robin joined me and we thermalled some more. Got to cloudbase eventually (5500ft or there abouts)
Kept heading south. Looked like bridge of orchy was in glide range.
Ooops. Must keep an eye on the gps vario. It showed a strong southerly wind but I ignored it.

10 down. landed south of loch tulla.

Rob had spotted the southerly, turned round and flew back to the carpark.

I had a great day out. Home 10pm or there abouts.

Things to work on:
Harness setup / reserve pod so I can see the vario rather than just here it. Would have helped if I saw the thermal tracker too.
Plan my flight better. I had a plan to get up and thermal (plan achieved) but then had no idea where to go next.