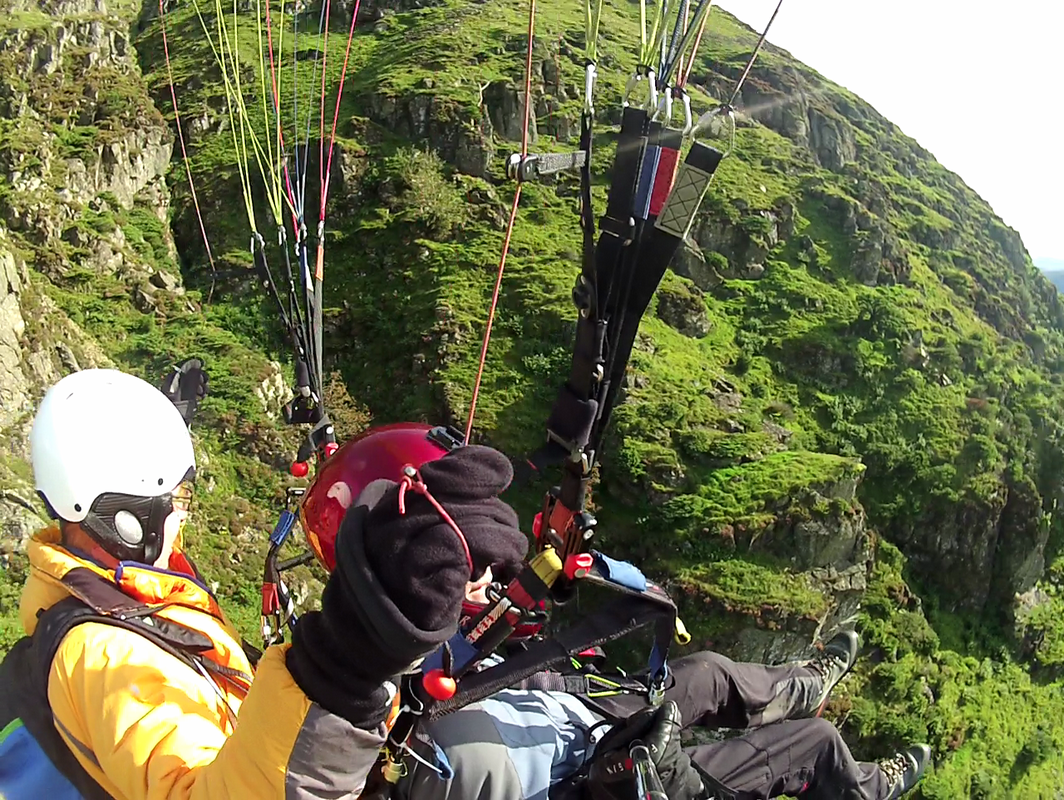 North or South?
It can be a bit of a dilemma where to go flying sometimes. I can go north from Lockerbie to Tinto in 40ish min or south to Clough Head in the lakes.
Sunday was a bit like that.
Choices, choices!

Sky to the north looked good. To the south it was not so good.
If I head to Tinto then it's probably my normal glider. Light winds. lots of struggling up the hill etc.
Going south.. looking light but a chance of doing a couple of tandem flights.

Lightish conditions in both directions so tandem wins over solo.

Ignored the spots of rain and big black clouds between Carlisle and Penrith. It looked brighter to the west. Or that's what I was hoping for!

Got down to Richard B's house about 2ish then we headed to Clough. 3 gliders in the air and reasonably high so looked good.
Drove up as far as was good then walked up to the top of the knotts. A nice steady breeze from the West NW on take off.
We started to unpack then heard a noise. Spotted the RED ARROWS going down the valley towards Helvellyn.
Two groups of 5 flying in formation. right over the top of the landing field.

Mmm Notams... So Richard checked (we should have checked first!) and they were not due to return so it was safe to fly.

So we flew. Took off and scratched up the cliffs. Richard as pilot and me as passenger. We got in quite close at times. Being a passenger and not having the controls is a bit weird.
We were aiming on getting as many short flights in. The new BHPA Tandem requirements is a minimum of 10 flights per year which is a good thing but there were no requirements in previous years.
The requirements don't define what a flight is (or not that I've seen) so take off, fly about and land. Repeat.

My turn. Took off fine and headed onto the cliffs. Not a lot of lift. Ohh joy.. scratching the cliffs on a tandem!  We got as far as the quarry before I chickened out. Just catching some lift as we turned back.
Then nothing till the scree in front of take off. Thermal kicking off there. Got a bit of height but not enough to top land so headed along to the miners path and landed (maybe a tad fast..)

Packed up and back to take off. I mentioned the UP spreader bars have a removable bar that turns them from Hard to soft spreaders (That's the bit that connects the pilot, passenger and wing together) to Richard. He'd not really flown with soft spreaders and neither had I so we gave it a go.

The glider felt completely different. A lot more damped where before it felt quite agile. We got onto the cliffs and up to the top without a problem this time :-)
After a wee bit of soaring it was over to the knotts again to top land. Spreader bar re-assembled and another flight.

The sea air was forming cloud over Jenkins and Blencathra. And a bit over Clough too but there was still a light breeze. Off we went.
Lift :-) and the glider felt so much better. I guess on a strong day the dampening of things could be good. Today it felt good to have the hard spreaders back.

It was easy this time to get to the top. We almost top landed but I didn't like the idea of it. I was feeling a bit knackered. Lots of concentration from me scratching on the cliffs as both a passenger and a pilot! I'm more used to the more rounded border hills.

Was almost tempted to top land at the knots to get 4 rather than 3 flights under my belt but we flew down and landed by the old coach road.

Packed up and back to the car.
Really enjoyed the trip south. Especially when I heard that Tinto and Dungavel had been a bit pants!

Good to get more tandem practice in too and to catch up with Richard again. I think I did my first tandem flights with him at Coombe Gibbet probably 10 years ago!

Made it home in time to read the kids a bed time story. Which was an added bonus.