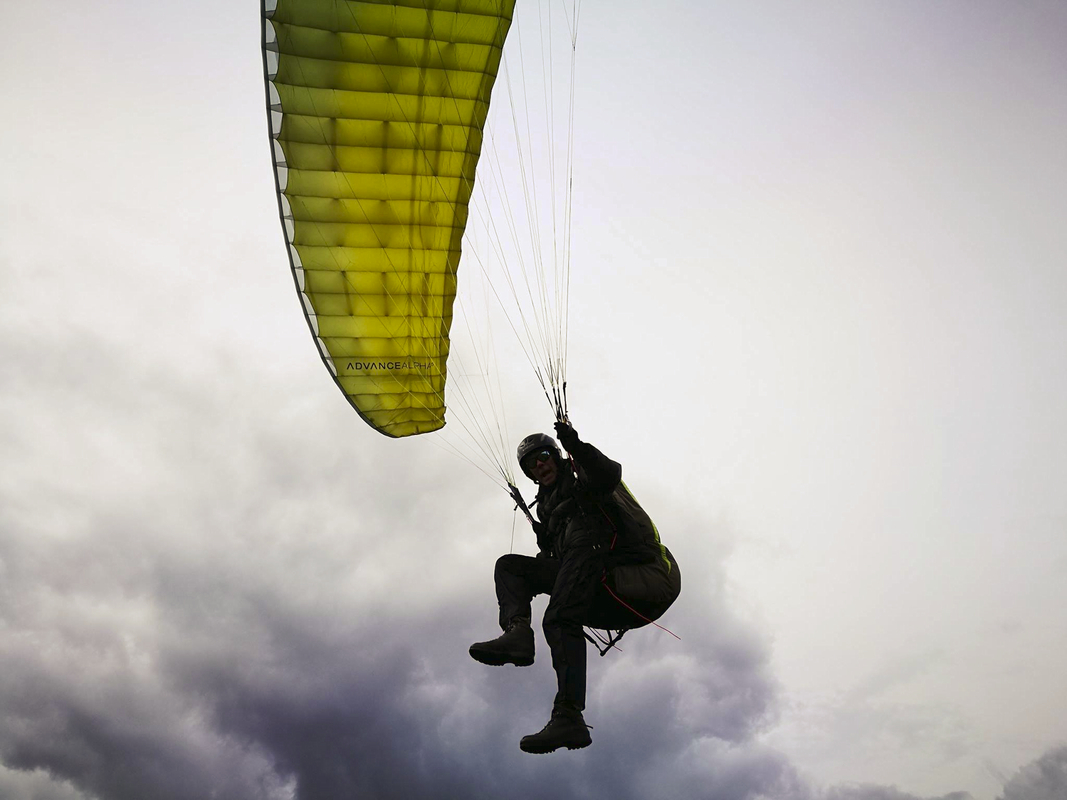 Starts out with a bit off chat on our group and a derision is made to meet up at 1pm, but I decide to sneak round 30 min earlier to check out another way up the hill. I want to walk up the south shoulder to see if its easier, it is and being open to the main valley, a good breeze is to be observed even low down on the face.

I walk just over halfway and stop for a rest, the whole ridge is being flown by lots of crows and a few Buzzards, a pair off Ravens cruise past at my level and I asked them whats it like today then, they seemed happy enough as they soared higher so I rolled out the glider and clipped in,

An easy launch and I started to kite up along the main face, this only lasted seconds as the wing just wanted to fly and I was soon soaring up the big face myself.

I was being careful at first not wanting to get sucked over the back as it was strong enough. after 20min I felt ok about checking out the top landing. a good breeze on top but fine. by this time Dudley had arrived and was walking up the side of the big bowl.

other folk started to arrive, Jamie with tandem and passenger/ victim. Tim, Barry,Andrew, Rob,Stephen, Derek and Tom from Berwick. Everyone had a grand float about, Jamie managed to get a couple of top landings in on the tandem and ended the day by almost flying to the Gordon arms for drink.

After a while all the lightweights left leaving Dudley and I the entire hill to ourselves. By this time the wind had picked up to strong enough, " Its fine says Dudley" and launched off. I was getting tired after blasting about all afternoon.

I stood for a short time watching, it looked great and Dudley flew past and shouted down that it was fine so I launched, lovely and smooth. We cruised about for a bit before setting of into the main valley to land. it was to strong to risk landing at the cars. we landed at the cottage called Eagles nest, it was getting on for 6pm. I sat for a while in that lovely spot taking in the late summer feeling good about the day....