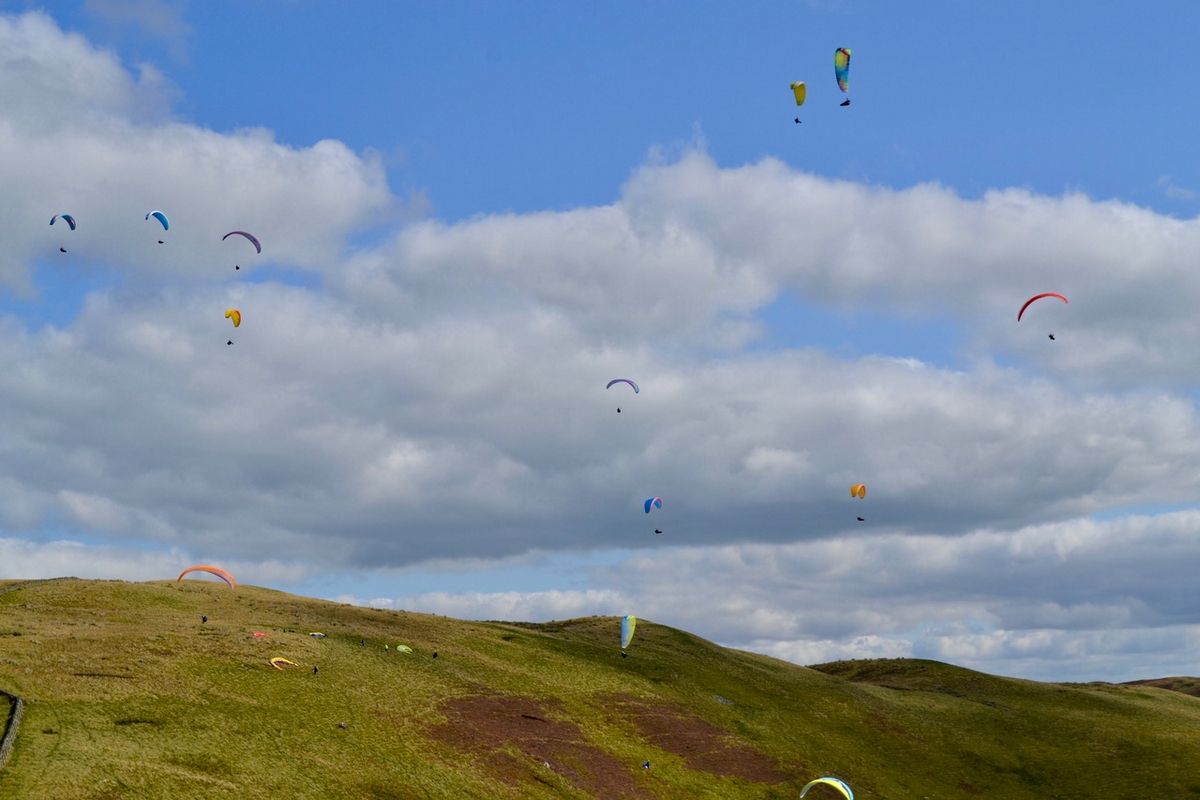 Jamie kindly informed everyone on the ‘group’ that it was Wingbeat’s turn to host a Scottish Nationals round and it was time to watch the forecasts since there was an outside possibility that the weekend would come right.

Tradition states that this round is followed by a get together at Cacra in the evening so on Thursday evening Jamie, Ged and Tommy went in search of firewood since any depletion of Tommy’s home pile is a capital offence.  Wood gathered but there was still in-decision as to the status of the event which remained at amber. It was changed to green late on Friday morning since Saturday forecasts indicated flyable SW/S winds for the morning at least.

10am on Saturday saw a motley selection of pilots arrive at Cacra for the briefing.  A trip up the lower slopes of Cacra suggested the breeze was SW so a ‘quick’ decision was made to move to Witchie Knowe since it is top driveable although murmurs were heard that Mountbenger was better for XC!!

The usual sharing of transport (not!) saw everyone at Witchie just before 11am with the task set to goal at Galashiels, close to Abbotsford House, about 20k away.  Pilots walked across to the SW bowl in a nil to slight breeze while cloud streets formed overhead.  Since the forecast suggested strengthening winds several wings tried to gain what height they could in the light breeze only to slope land or enjoy a sweaty walk back up with Rob probably gaining the most height on the floaty Carrera.

Sitting on the hill seemed a sensible thing to do until I could feel the occasional thermal draught set up.  Clipping in I watched as Alex tested a Chilli on the south take-off gaining height suggesting a thermal was releasing.  A quick launch into lifting air gained sufficient height above take off not to have to complete a beat.  Playing gently with the brakes (new harness / higher hang point!!) saw increasing height gain until it was possible to circle cautiously over the bowl. Rob, Derek and Sean seemed to have the same idea until the decision was made to leave the hill and head down the valley listening to the gentle singing from the Oudie in a gaggle that seemed to compete for top of the pile. It wasn’t long before we approached base and an even shorter time before base closed in beneath us!!!!

A quick check of the compass set a bearing for 4 minutes that seemed like 40 until Foulshiels appeared ahead (Jamie later suggested that singing is good when in a white room).  Rob at this stage had decided to head off on the usual tangent towards Innerleithen although he swore it was Gala, I stayed high whilst Derek and Sean appeared somewhere below.  Above Foulshiels I spotted Charlie floating around at base so went to join him and watched Derek circling below on the multi-coloured Cure.  At this stage it was difficult to stay on task since I could see home below to the north which would have meant an easy lift back. However concentration on base (no more white rooms today!) and the task formulated a plan for final glide to Gala via a route over the south faces of the Tweed valley below.  Taking in the view I arrived over the Tweed bridge at Gala with 1500ft to spare but was determined to land in goal so had plenty of time to view the rugby training, Tweedbank and watch salmon jumping in the Tweed below.  Sean was high and slightly south heading towards the Eildons as I made the final turns to loose height and land in goal.  Elated I unclipped and wondered about the final stage of the XC – getting back to Witchie.

An excellent day with excellent company and a flight to remember.

Doarama video based on track logs from the guys who got away from the hill : http://doarama.com/view/1598811