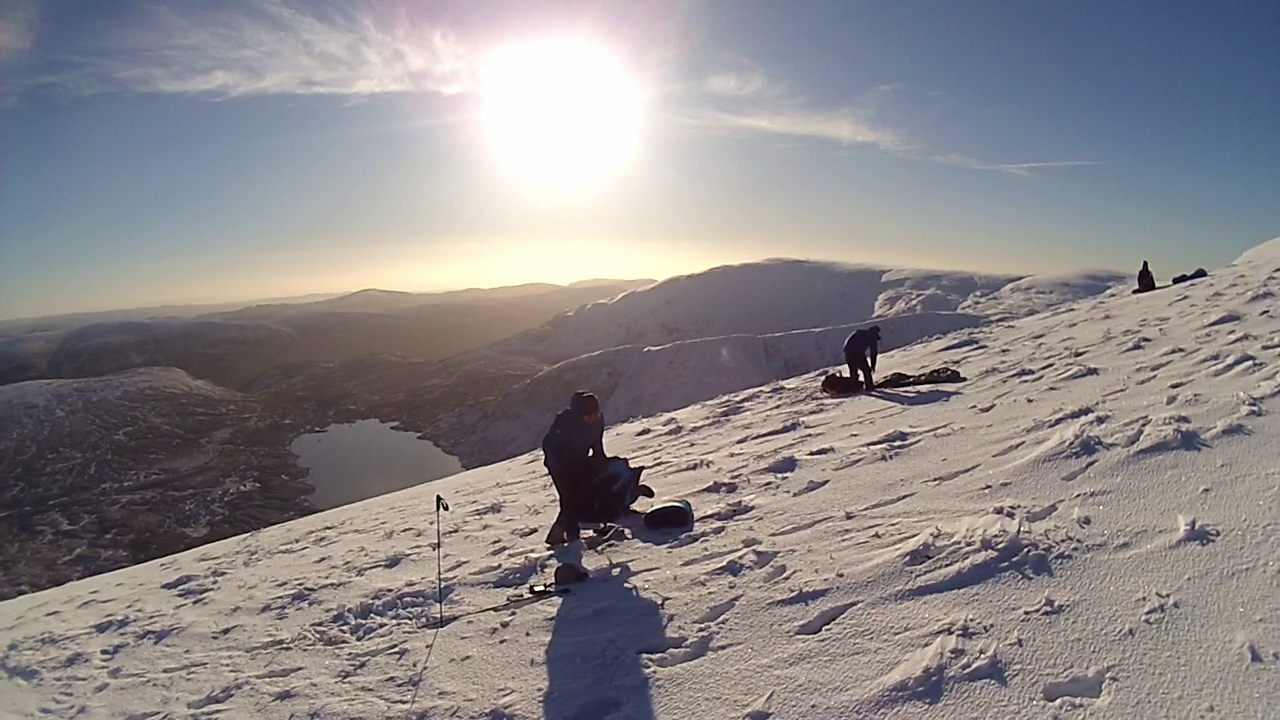 And so it begins. Meeting up at the AA box beside St Marys loch at the Megget junction for 9.45am.

The night before had me weighing kit. I wanted no extra weight as its a fair walk up onto the tops.

Fred and Rob were already there when I arrived closely followed by Jamie, Alex and Dave Hutch. 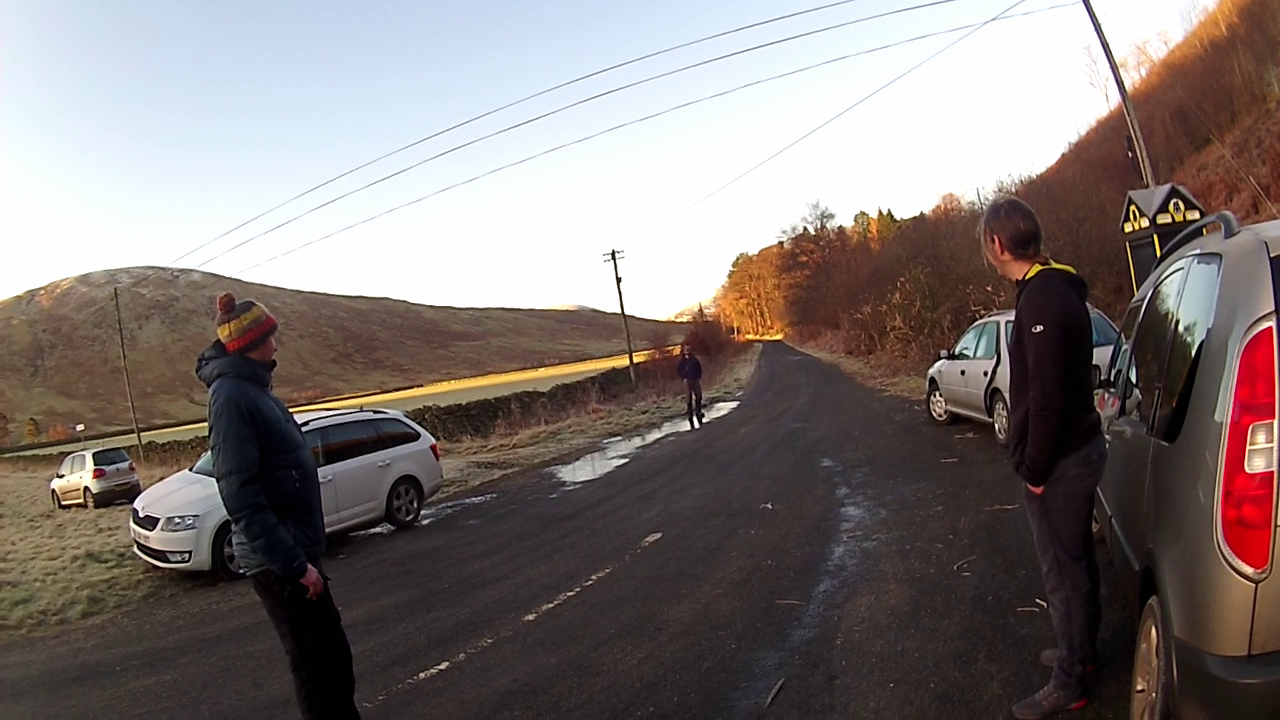 We managed to get everyone into two cars and set off up the very icy road that takes you past the Meggat reservoir to the Meggat stane.

From there we walked up the face to 'Nickies Knowes.' Rob was breaking trail like an OX, I stayed tucked in right behind him, using the same tracks to save energy. Everyone did splendidly and we were on the tops in just under the hour.

We could see the windmills turning way over to the west, there was a breeze.

After a tough walk along the tops through crusty snow we arrived on 'Lochcraig head.' The wind was coming nicely up the huge S/E face and it was strong enough! Alex was first to set off.

It was a tad windy I found it hard to launch. I went lower down and managed to get off. Once in the air it was brilliant, lots of lift out over Loch Skeen way below and frozen solid. I wondered if a body falling from a thousand feet would break the ice.

Alex and myself cruised about for 30mins before anyway else managed to get off. Fred was next off with his new Nova Phantom. It looked really nice. He was pushing way out and at one point I knew he thought about going for 'WHITE COOMB," another big hill to the west.

Alex by this time was doing wing overs on the tower slope almost at the bottom so I went down for a look. It was still incredibly lifty even down here. I managed a bit of wagga myself before landing not far from the bottom still in strong lift. That first flight was 40mins.

Dave Lyal had turned up but without his wing. He had injured his neck at some point and felt unable to fly, but he was helping the others get off. 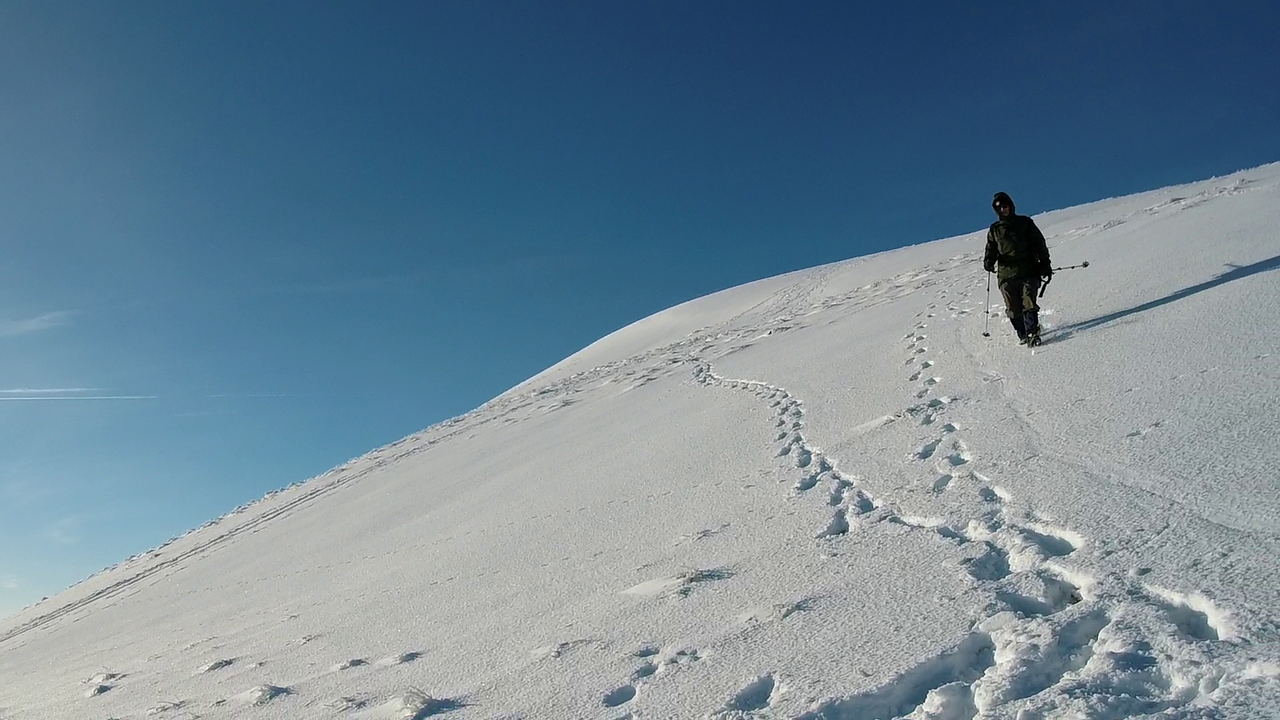 I was going to have some food but could not resist launching again, scratching up from the very low down up the huge face was very rewarding, "going up" top floor please! God I love scratching right in close.

Everyone is in the air now and the wind is not as strong, and we are able to land on the top "just," its still very lifty.

After 35mins I decide to glide off and head across to 'Five Cairns Hill' and on down into what I call the hidden valley. I land beside the old remote cottage called ' Winter Hopeburn.' A beautiful wild place, and fantastic fly down.

Over the next 20 mins everyone else made their way down. Rob landed at the cottage after spiralling down. The others extended their glide on a good bit further, Fred made it out onto the road on his phantom.

And so the sun is doing down on whats been a small epic day out. A fair walk back out to the road in the freezing conditions, its fantastic.

Dave Lyal has walked of and has arrived with a car to take us back to the other cars and Freds secret stash of whiskey. Fred and I have a fly nip before setting off for the "Gordon Arms" for the cups of tea and chips, Rob paid the Bill

So there you go!