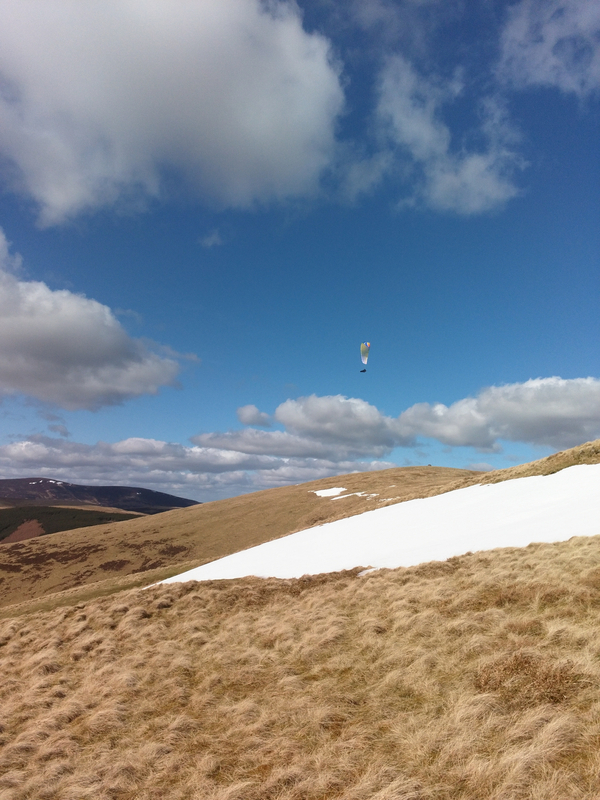 Nahhh. Can't be right. A flyable Saturday down in the lakes in March. too windy on our sites so a plan of sorts was formed.

Errr looks ok for mountbenger. Can't be arsed with the drive down to the lakes. What do you think?

Looked ok north and south. So Rob called Fred who was supposed to pick me up at 8.30 and we make a plan to head to mounbenger.

As the sense of urgency was gone I faffed a bit more and then realised... should really be on the hill so off I wander to mounbenger. Ged and Dudley are there. Fred's car is there and he's in the air already!

Slow walk up the hill with Dudley. Caught and Passing Ged along the way. Then a wide ranging discussion about houses, boilers and the fact Fred was climbing out. Less faff more flying.

DaveH is also flying having hitched a lift to the hill.

4 of us in the air - strong at times. then weak. quite thermic. fun.

None of us managed to climb particularly high. apart from fred who made it to the other side of jedburgh!

by 2pm it had got a bit boisterous. and then it was too strong to launch. Probably highly flyable but we were all a bit rusty and more than happy to stay on the ground.

A good day out. Ohh and Rob had a grand day out in the lakes after persuading me and Fred to go to mountbenger.