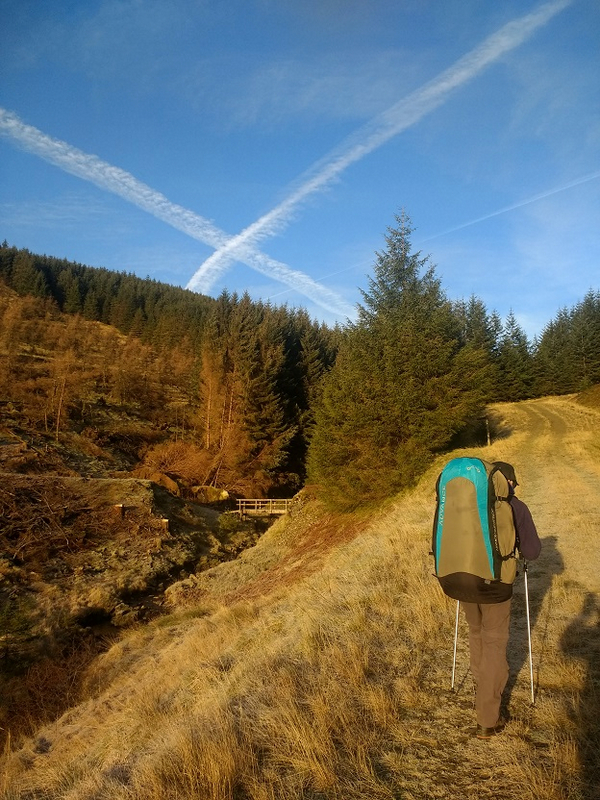 Of course, the intention was to take advantage of a forecast flying window, but with lots of variations in forecasts (apart from a general agreement it would drop off around midday) we set off with measured expectation.
The drop off meant an early start was needed, so arrangements were made the night before for our adventure, and it was a pleasant change to just get up and go in the morning. The omens were good as we headed up the track from Potburn, with a fantastic Welcome to Scotland in the sky ahead. Taking a leisurely paces, we made good progress and without too much effort we arrived on top in exactly one hour. What a view opened up to us, with 360 visibility and Skiddaw poking out to the SW. Everything was looking perfect, with lovely skies and a very soarable breeze - except coming from the E/NE. Well never saw that in any forecast!
Time for a picnic and parachat at the top, waiting for the predicted backing of the wind to bring it onto the face. We were shortly joined by Sean who had tackled the ascent from the front, parking in the Yarrow valley. A more energetic approach, but as it turned out, the better decision.
Within 25 minutes the wind did indeed swing round to the NW, along with the predicted drop off, making it flyable but not soarable. A very neat forward launch saw Sean get a very nice extended top to bottom back to his car, while the two us headed back down the SW face. No flying for us, and about 7 minutes for Sean, but still a really enjoyable day, with some fantastic views, and that great feeling of getting out into these hills of ours.