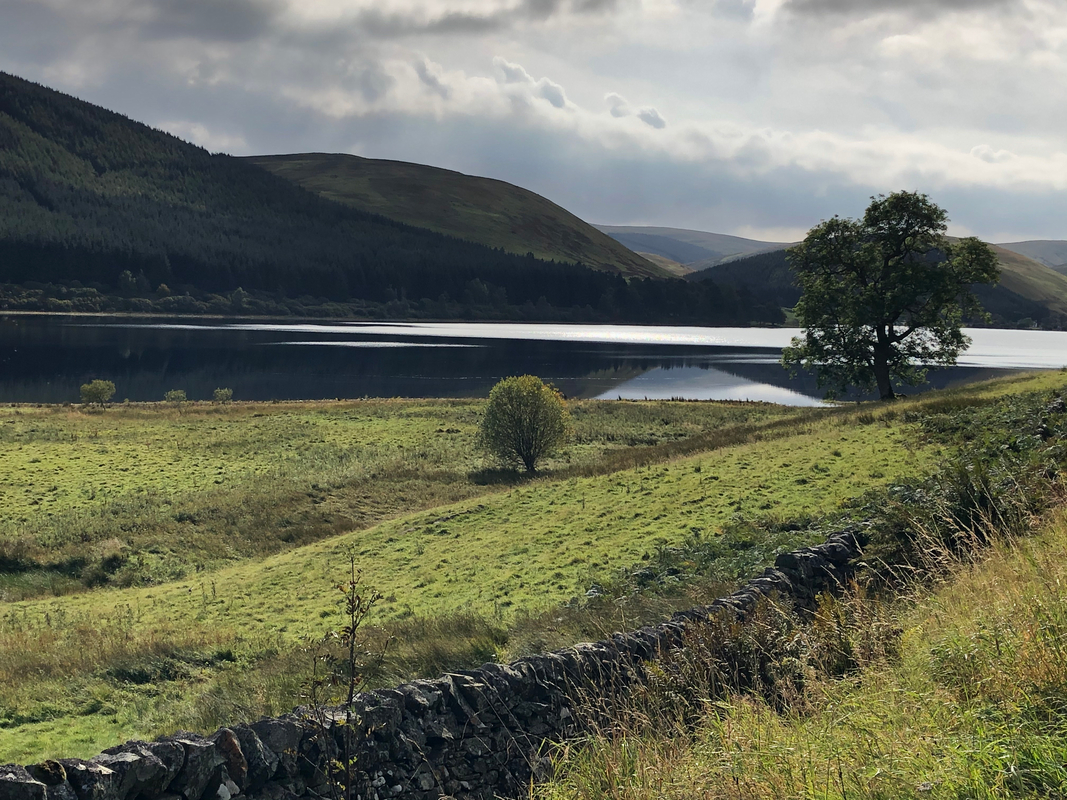 The forecast wind was towards the weak end of the range but right on the nose of the hill. Predicted to be moving more to the North as the afternoon progressed. It was VERY flat as we made our way on the road from Selkirk to St Mary's Loch.

The water was like a mirror for most of the Loch, but slowly developing signs of waves on the water suggested it would be worth the walk up. We must also be getting a wee bit fitter as the walk up seemed less arduous than the last time - maybe it was the flask of soup before we left the car. At the top the base wind was at the top end and gusts on top of that.
(Psychologically, it is strange going to a site where you have had good advice from seasoned Wingbeaters - you kind of stop thinking for yourself & the thought crossed my mind that we should wait for Jamie who would be arriving later or even that maybe we shouldn't be flying as it was too strong)

Once it weakened a little we got set up. Graham had a few issues with his wing being blown into a tangle before he could even think about launching, so I moved myself down the hill to a lower indented area, waited for a lull, fluffed up and stepped into the air reverse style - it was a really sweet take off. Thanks so much to Fred, Alex, Rob, Tommy, Dudley and many others my launches are getting better. Then I boated about for a good while lording it over Graham (who was taking some great footage of me flying - which was lovely) and got some good height from lift on the nose of the hill. Finally, Graham finished muttering incantations under his breath, got his act together and joined me in the air. We then enjoyed an extended cruise around together before we noticed Jamie speedily ascending the hill - oh to be fit & young(ish). Air was fairly smooth although there was quite strong base. There was plenty of lift to ridge soar at the top and some evidence of thermals to push out into. After a while I headed around the face towards Megget and realising I had lost a bit of height, I tucked in close to the hill hopeful that the dynamic lift would help me to gain it back.

Lower down there was very little lift indeed (it felt like the wind was just blowing over the tops of the hills leaving the glens becalmed) and I realised that I should take the slope landing option. A good landing. Then I thought I could kite the wing up the hill but as there was no wind at all on that face any more it was mushroom and trudge time! Graham had meanwhile lost height in the lull too. He headed to the landing field and had a great landing even though it was "interesting" in the air by the Lochside. I walked up till I thought I was high enough to reach to the landing field and did another tidy reverse launch (in minimal wind) and floated down to join him. I still need to do some practice with landing technique – I still react a little too slowly sadly. Safely on the ground we watched sky god Jamie G show us proper approach and landing technique as he floated in to join us.

All in all it was a lovely blustery day and I had a super flight. I do love the Bridgend site; we have had some cracking flying there. Oh and we saw an RAF training jet fly past during our walk up, which was fun. Graham will know what kind of jet it was, I never did any of those Airfix model things!