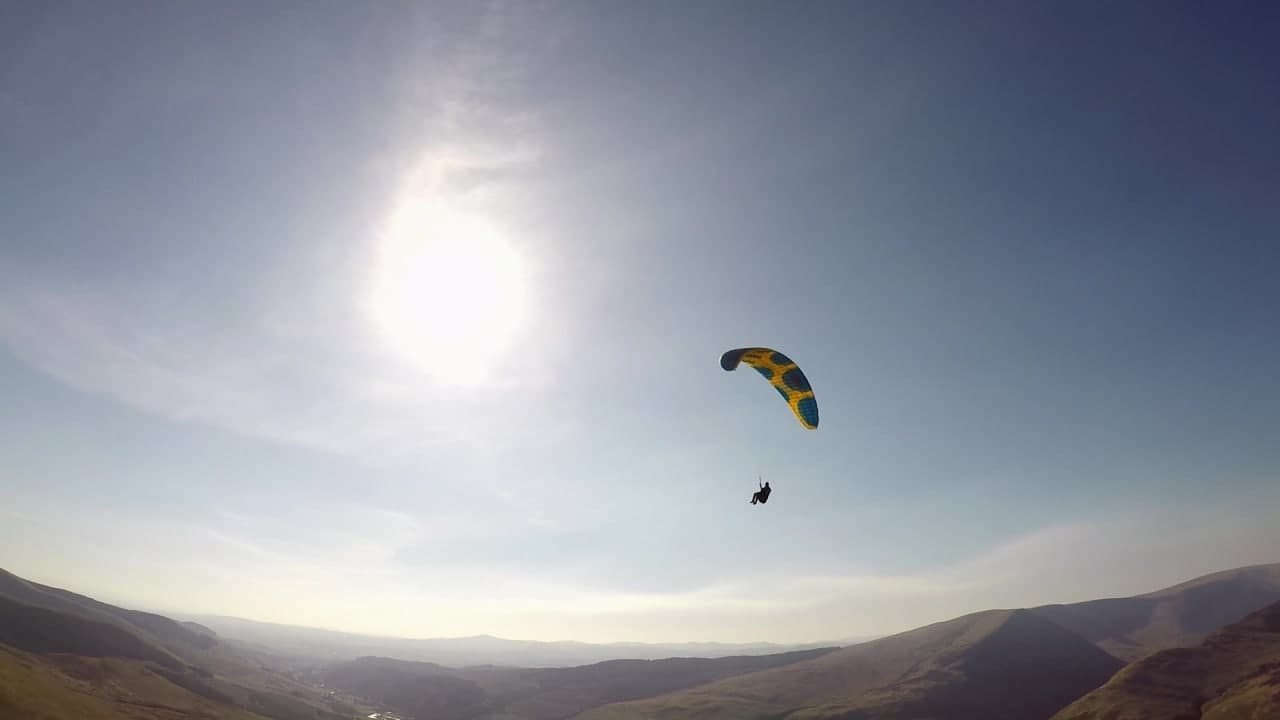 Well today was adventure day for Graham and me; discovering a (new to us) site in the Borders. Bodesbeck law.

The wingbeat site guide was true to form and casually understated  what a spectacular spot it is. The day before we had yomped up Bridgend only to return as the base wind was too much and the gusts aggressive. It was also very chilly despite the sun having some warmth. So this time we took the sage advice to come equipped with an extra layer just incase. The walk up was lovely, but being a bit slower than nearly everyone else, I wasn’t sure where they had gone ! I then spotted a couple of people up by the Cairnstone at the top. They didn’t look familiar and their bags didn’t look quite big enough to hold a wing & harness ( even smaller than Dave H’s ultra lightweight gear ). So I aimed in a NW direction and found the team camped out overlooking the most amazing vista over the A708 valley towards White Combe. The glacial valleys opposite were just stunning and incredibly dramatic.

Funny though after the day before ; there was barely any wind . The forecast had said it would be light but I don’t think any of us thought it would be quite so light. A few gentle thermals pushed in occasionally, but it was so serene you could have just fallen asleep watching the view & hearing the skylarks singing lazily. Eventually a few ventured into the air but you could see the inversion and it was made more obvious by the smoke from the heather burning reaching a certain level & then spilling in all directions as even that failed to permeate the barrier.

Derek and Rob made some great height in some of the few stronger thermals, but they didn’t seem to reach up very high. I did a wee bit of ground handling & got VERY hot ( what with my extra layer and no wind to speak of ). Finally I took off and gained a weee bit of height trying to learn to sniff out some elusive lift. Pleased with my takeoff though .. flew up the valley a bit to check out the landing positions and then flew back to the ridge - there were some great lifty bits, but not enough for me to climb super high so I never got a peek at Loch Skene.

Flew back and started packing up my kit when I saw G & Tommy come flying over - phew they didn’t see my rather sketchy landing ... - then had a lovely walk back to the cars & watched the others flying in. Finally a lovely hot drink and a wee blether by the cars - plus a grand demonstration of Tommy’s Ghillie kettle . What a splendid day - I will sleep well tonight. I can see that with the wind being right and no inversion this could be a truly epic site, but for me as a first time this was epic enough in so many ways, but I certainly look forward to visiting this special  place again .