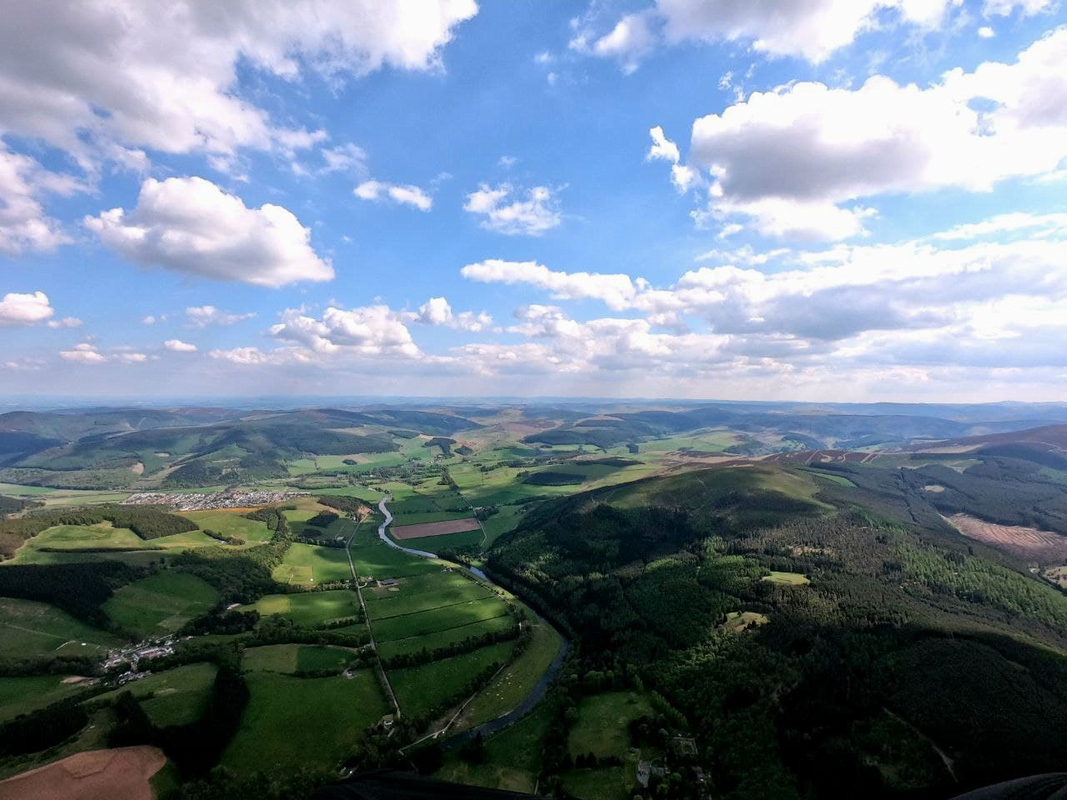 Nice flight today from Witchy to the Moorfoots takeoff. Not a classic XC day, but there was a big convergence line lying over WItchy. Myself, Dudley, Fred, Tim, Will M, Graham S and Mike J were there. Later Stephen joined us. Mike and Graham left in a weak climb leaving us at the hill, but it looked like hard going and I think they did not get very far. I thought maybe we had missed our chance, but I watched Stephen go from floating about elegantly above the hill to going up quite fast and quite high. I must admit I chuckled a bit at the change in body language.

Right I thought, worth a try, and as buggering about on the ridge had so far not proved very useful I pushed way forward over the flat, straight into a good 3m/s or so climb. It was a bit surgey on the outside wing but manageable.  In very little time I was more or less directly over take off, 100 feet under airspace and watching Fred climbing up to join me. Dudley, who had been looking particularly graceful all day, had unfortunately chosen the moment the thermal had come through to have lunch. I made that mistake earlier in the year when Fred flew to Stow and I had learned my lesson.

My plan was to hang with the lift as long as possible, so I flew out the thermal to stay under airspace, then could not find it again. As I started loosing height, I thought decision time, ah fuck it, might as well go for it. So I looked down wind over Innerleithen and could see three clouds I could possibly reach before hitting the ground. I assumed the Chrigle pose, hands on the C loops, trimming the glider on the speed bar for best glide and heading for the first cloud.

It was above a south facing bowl, but obviously dying, so I carried on into the lee. That's where it all went wrong. I hit a thermal, did a half turn, and it felt like the glider hit ice. There was a whack, thwump as it collapsed and opened. Chrigle evaporated. This was not in the script. I tried another turn, bad idea,  and thought you really need not to be here. I pushed on, hit another thermal, same thing, like the glider hit ice, collapse. No more attempts. I pushed over into the windward side and thought that's it for me. I am going to land.

Then it went even wronger. The benign cloud I had seen 5 min earlier was now a black monster and rather than finding sink, the glider rocketed up skywards and the outside wing surged for the horizon. It took full control input to stop it. I looked down at the wind meter and it was showing 26Km/h and I was  above a valley which felt like a washing machine. I can remember thinking, oh fuck, this is not good. I can't land down there. Climbing seemed the least risky option. I did manage to find a bit of the thermal which was the right side of terrifying. I was most definitely not trying to optimise the climb. Even at that, it took zero time to get back to  airspace.

I glided off up wind towards the North. I switched the Oudie to show airspace, and I could see I was rapidly approaching the 3500 wedge so I did a 90 degree turn to get round it. But when I got to Fountainhall, I hit very obvious sea air. I thought I am going to be on the ground shortly, so did a quick recompute. It was obvious I was in convergence and it was going up wherever I went. Everything was within acceptable limits. Gentle thermals. 20Km/h wind. I thought I might as well turn back North down wind and just see how far I can get. As it turned out it was stupidly easy. Everything was going up.
It was just a case of doing a couple of turns to get back up to the airspace, and gliding on a few hundred yards and repeating.

I could see the Moorfoots takeoff in the distance. And it just felt like a good point to end the flight. I landed next to the Farmer and gave him a somewhat excited description of the flight. Fred hand landed at Peebles and him and Linda kindly retrieved me to Innerleithen where I met Dudley for a lift back to the hill after a shandy and a natter. First XC since lockdown. Terifyin in parts, sublime and surreal in others. A memorable day. Dudley said, after we left, it got quite messy at the hill, and difficult to climb out. I know that feeling only to well. It's such a shame because Dudley had generally been above us top that point. He said Tim and Stephen had a great day though and were all over the place.