FOOTSTEPS IN THE SNOW
First and foremost Wingbeater's another grand bit of a do at the Gordon Arms thank you all for making it happen, As behavior goes maybe because we have new club pilots in the fold, Christmas is in motion.
There was talk of flying Moorfoots the next day, early forecast had it looking quite strong but on the morning review it looked doable i myself felt the need of a fly, A quick call to head coach to see if he was thinking of gaunoot a plan wis set tae meet up at Innerleithen 11am, A O K i thought and then received a call to say pick me up at the house and keep the engine running and be ready for a quick getaway. That was quite evident on arrival at Tommy's house he threw his kit in the back of my van and says go go with Fiona in hot pursuit which i can only describe with a box in her arms saying Christmas lights, The birth of a Outlaw for sure,
TOMMYSOWERTHEWITTER ( Tommy is no longer suspected )
Well off we gaun on a very nice day the road up on the Scottish borders side was slightly sketchy at times the arrival to moorfoots by midday was complete. Ehh What's Up Doc
There was 5/6 pilots setting up by the road we decided to observe a while and noticed one pilot wasn't making any forward headway in the strongish fresh conditions, And with Tommy's wealth of experience suggested let's wait a while before commiting to walk across as it happens the wind was to ease by mid afternoon, We decided to hike across to Broad Law that stands at 451 m and reassess. A figure appeared in the distance a snow plowing dervish na it was the man of the moment club pilot of the year     Michael Haywood slowing down to a sprint to catch up with us, Tommy and Mike headed off to Torfichen hill at 466m to launch, Good i thought can go at my own pace and off they went. In the past i have not bothered to walk across to the cairn at Torfichen but this time I'm glad i did 2 out of the last 10 attempts of making it across the gap is not a good average. On arriving at take off oor Tommy was well into waga waga and testing the air with the absence of wingbeaters Michael was eager to get into the air to join in the fun, They soared about for ten minutes on Torfichen hill and tommy showing the way to jump the gap to Mauldslie hill that stands at 513 m above the water. Michael soaking up all Tommy's finesse managed to reach across naebother. I made 2 attempts to jump the gap to no avail cut my loses half way and returned to torfichen hill. On the day there were only 2 pilots that made the full ridge run and that was twae Wingbeat members, It was easy to be flushed down and with the wind getting lighter by late afternoon i noticed the maestro himself float bye back to within 50 yards of the cars a master class after 30 years in the game. On arriving back myself with smiles all round Tommy was so proud of his decision making while other decent pilots doing the walk of shame back to the cars. EE might think a em bummen his load but ee where no there tae say otherwise. WHAETELTEE ( Who gave you the information ).  A gid day oot wis hed By Tom Mick and Gerry.
Thats all for now Folks. 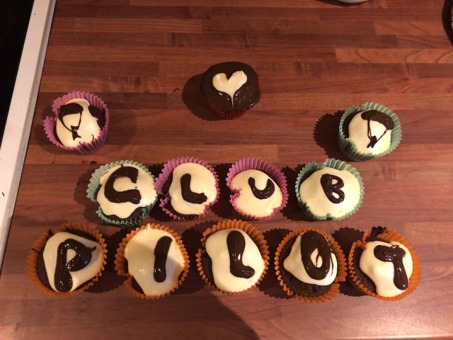 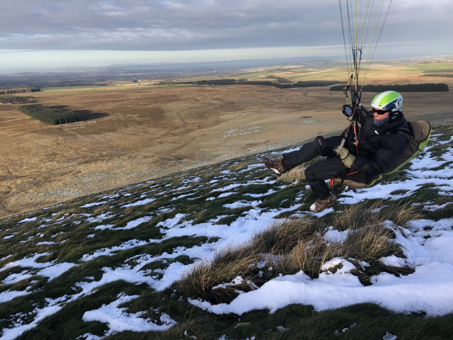 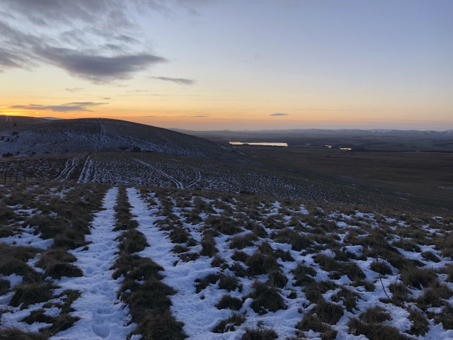 Ps Footsteps in the snaw deh try to keep up with Tommy Heather walk Bryson.
Written by any Twae ald eegits, Pictures by Michael Haywood.